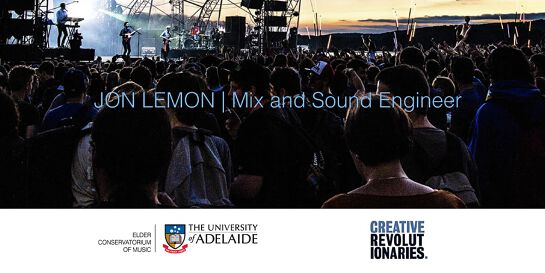 Join us at St Paul's Creative Centre for an enlightening conversation between Troy Sincock and legendary sound engineer Jon Lemon.

Creative Revolutionaries, the Sia Furler Institute and the Elder Conservatorium at the University of Adelaide are proud to present a conversation with Jon Lemon, world-renowned sound engineer and Troy Sincock, music industry leader, DJ and presenter and former general manager of Fresh FM. Special thanks to St Paul's Creative Centre, the Music Development Office and the Government of South Australia.

This event will be also be streamed live, please register your interest to be notified of the stream link the day before.

This event is on Level 1 of St Paul’s Creative Centre, accessible only by stairs. For questions on access, please contact St Paul’s staff on 7320 3337.

Jon Lemon is one of the most experienced live sound engineers in the music industry. Since the 80s, he has worked with some of the greatest musicians of the 20th and 21st century.

Most recently, Lemon has been the live sound engineer for former Pink Floyd frontman Roger Waters acclaimed Us+Them tour. Previously, he was the sound mixer at the iconic Pink Floyd reunion in 2005 at the Live 8 concert.

Lemon worked with a variety of different types of UK groups. From electronic groups such as Pet Shop Boys, Depeche Mode and the The, to rock bands like The Cure and Bryan Ferry (former Roxy Music frontman). Britpop bands such as Oasis and The Verve have also worked with Lemon.

After growing up in Adelaide, and working in the UK and US, Lemon has moved back home to South Australia. These days, he resides in Port Willunga, near the Fleurieu Peninsula.

Troy Sincock has almost 30 years experience as a leader, visionary, content creator, DJ and presenter.
Troy established one of the first electronic music programs on Adelaide radio in 1992 and then went on to become General Manager of Fresh 92.7 for 10 years.

Under his leadership he developed Ben & Liam (former triple j breakfast show) now the #1 breakfast show in Adelaide. Fresh 92.7 grew it’s audience to the second biggest market share of any community radio station in Australia and was awarded a Fast Movers 2016 Award and acknowledged as one of SA’s Top 25 small businesses.

Troy has extensive, well-rounded knowledge of the radio landscape. He has been employed by all three major Australian commercial radio networks – Nova, SCA and ARN and worked in a variety of roles in the commercial and community radio sectors – from General Manager, Content Manager and Presenter to Producer, Podcaster and he currently works as Roving Reporter at national broadcaster ABC and as Station Manager of fine music station 5mbs.

Troy chaired the Music Industry Council (MIC) providing a vision and voice for the South Australian Music Industry to stakeholders including government agencies, creating opportunities for the on-going development of the industry, impacting state legislation in the process.

Troy has been working as a DJ for 30 years and recently signed to London record label Ramrock Records with production partner Andy Sant.
He is a passionate advocate for the development of the music industry, empowerment of youth, leadership, communication and the future of radio.