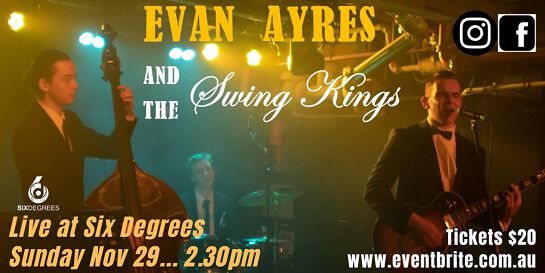 Born and raised in Albany, Evan moved to Perth early 2020 where he is currently studying a Bachelor of Music in Jazz vocals at WAAPA. Evan Ayres and The Swing Kings, all met studying the same course at WAAPA, and features Evan Ayres (Vocals and Guitar), Cass Evans-Ocharern (Double Bass) and Will Wallace (Drums).

Known for Selling out the Albany Port Theatre six times, performing in Albany Light Opera and Theatre Company’s musicals and playing regularly on ABC Great Southern. Evan could not wait to return home with the band.

Performing Swing Jazz classics and originals (written by Evan), from Michael Buble to Fred Astaire, a couple of rock n roll tunes and even a little country, this is an event you do not want to miss!