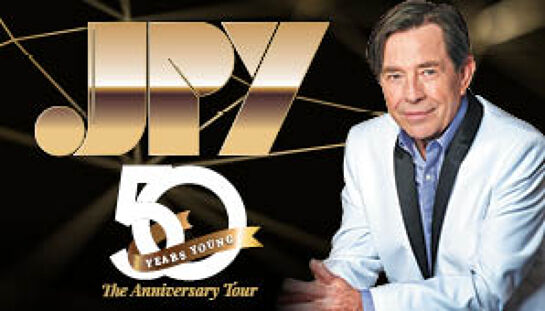 MY TICKETEK PRE-SALE
Wed 17 Jun, 10am - Mon 22 Jun, 9am*
On sale to public Mon 22 Jun, 10am
A pre-sale is an opportunity to secure tickets prior to the public, not a preferential seating service. On sale times are quoted in local time. *Or until pre-sale allocation is sold out.

From ’70s pop icon to the ARIA Hall of Fame, John Paul Young has become the soundtrack for the ‘Countdown’ generation and beyond. John tells and sings his own story from his beginnings as a Scottish immigrant to his legendary status in Aussie music folklore.

With over 4 million album sales worldwide, numerous awards and an induction into the ARIA Hall of Fame in 2009, John Paul Young is recognised as one of the most iconic artists in Australian music’s history. In 2012, John received an Order of Australia (OAM) for his services to charity and the music industry.

The Allstar Band features two of the original members in Warren “The Pig” Morgan who cut his teeth in the original Aztecs and Ronnie “Rockwell T James” Peel, of The Missing Links and La De Das fame. Both have been with John since the beginning and have been joined over the years by Greg Plimmer, Juan Gonzalez and Michael “China” Walker and this outfit has been together since the early 80’s.
.

Visit the Enmore Theatre's website, subscribe to become a Friend of Enmore and receive the latest news on upcoming events and special offers.