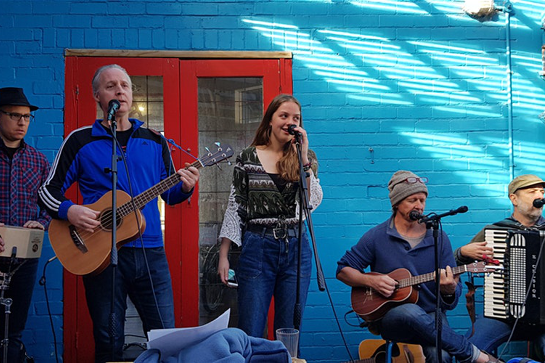 After nearly 20 years living in Canada it is time for Shani's talented brother Robert and her niece Scarlett to perform in their home town!

Scarlett studied at Rosedale Heights School of The Arts in Toronto, and has always been influenced and inspired by the arts and the role it plays in her community. She served as the youth advisor board member for “Jamii Esplanade” - the community arts group in her local Toronto neighbourhood. She has participated as a musician, singer, dancer, storyteller, and organizer with Jamii.

Scarlett’s original music is folk/indie in style - taking lyrics from her own experiences in a dual-citizen family - experiences of moving, family, the meaning of “home” - and pairing them with acoustic guitar and piano. Other themes she touches on are the environment and climate change, as well as beautiful personal musical portraits of people she has encountered in her life. Stylistically, she is heavily influenced by Joni Mitchell, Carole King, Regina Spektor and Fleetwood Mac. As a young person, she has a unique perspective on the world, and her lyrics are honest, uncompromising and raw.

In early 2019, Scarlett spent a term at Fremantle College where she was submitted into a specialized music program. She has performed at multiple bars/cafes in the Toronto area and rural Ontario, as well as in Australia. Her music has elicited an invitation to record with Wolfe Island Records Chris Brown (Bourbon Tabernacle Choir) and she has already begun bedtracks for an EP to be released under the Wolfe Island Records label.

Robert Graham has been a professional musician for 25 years, since leaving the teaching profession in WA in 1995. He is excited to continue his musical journey back in Perth, after working in various provinces of Canada. He was the frontman and writer for the Toronto based band “The Fairest and Best” for six years, toured the UK with Canadian folk super-group “Tanglefoot”, and was also a member of Chilean/Australian group “Los Chasquis”.

An award-winning songwriter, Graham’s debut album “Storm in a Teacup” was described by BBC Tees as “ingenious, sophisticated pop music with more twists and turns than your average Agatha Christie novel”. His 2015 EP “When I Feel Like This” with his band The Fairest and Best garnered considerable airplay in the U.S and Canada, as well as licensing contracts with several prominent American TV networks and crappy American TV shows.

Graham has maintained a multi-faceted career as a Music Director, pianist, accompanist, vocalist, and vocal/repertoire coach and has worked on numerous theatre productions across Canada and Australia.

His original songs are multi-genre and cover the map lyrically. Many focus on the plight of refugees - a topic dear to his heart.

Oh, and he is also Shani’s little brother!