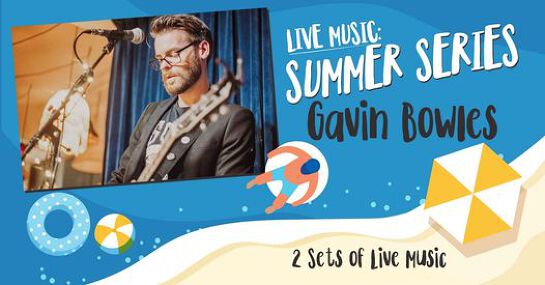 Kick back and banish the pre-week blues at Katoomba's best bar and burger joint, with a serving of the Blue Mountains best live music on the side. With nostalgic decor, old-school meals, craft beers, regional wines and retro cocktails, Aunty Ed's Katoomba will be THE place to hang out on a Sunday evening. But book ahead - Aunty Ed's is a locals' favourite night out.

This week, GAVIN BOWLES will be dropping in for a couple of sets. The Blue Mountains based troubadour, Gavin Bowles, has made a name for himself over the past decade as an accomplished songwriter and performer - including several national tours, considerable community radio play across the country, a number of residencies and as a singer/guitarist for various artists and projects.

In the last couple of years, Bowles has established an exciting solo career. 2018 saw the release of his debut solo EP "King of Nothing" (described by Haze Mag as "...seamlessly walking into strut-worthy blues guitars.....his lyrics convey the sophistication of a modern-day hybrid of Paul Kelly and Elvis Costello”). Following in 2019 was the release of single "Slave", with its blend of rockabilly swagger and indie-rock/pop sensibilities. 2020 began with the release of follow up single “The Daily Grind” (with accompanying “messy” film clip); an anecdote for the young, modern ne'er-do-well, bursting with frenetic energy and exhibiting the talents of backing band The Distractions. Mid 2020 saw the release of the Isolation-appropriate single “Apartmentality”; painting a picture of the boredom and frustrations of being stuck in a small space - set to a slinky guitar riff and chilled groove.

​Over the past 3 years Gavin has lived in the heart of North Melbourne, Western Sydney and the Blue Mountains – soaking in the atmospheres, sights, smells and sounds of differing urban and suburban living and music scenes. With over a decade of touring and recording under his belt in various groups and solo, Gavin exhibits a refined live show, toting songs of personal triumphs and tribulations and an idiosyncratic view on modern life, always with a guitar lick and smirk in tow.

Presented by 'Music in the Mountains', Aunty Ed's Summer Series is the best groove you're going to find anywhere in the Blue Mountains. The vibe is casual, the beer is cold, the burgers are tops, and the live music is the perfect backdrop when hanging out with some mates. To make sure everyone gets a chance to enjoy the live tunes, Aunty Ed's offers 2 sets of live music, between 6:00-7:00 pm & 7:30-8:30 pm. With 2-hour dinner sittings, there's double the chance to catch the Summer Series at Aunty Ed's. Reservations are essential - head to auntyeds.com.au to book your dinner table now as seats fill fast.

WHAT IS AUNTY ED'S?:

We are Katoomba's Best retro-styled restaurant, cafe and bar located halfway down Katoomba street in a hidden basement. Serving up classic dishes, burgers and snacks, Aunty Ed's menu caters for all tastes and dietary requirements including tasty options for our coeliac and vegan friends. Our delicious milkshakes and spiders are a hit with kids of all ages, topped with fresh cream and sweet treats. We grind fresh, locally roasted beans from Cassiopeia coffee and alternative milks from MilkLab Co are available. For the big kids, the bar is well stocked with over 40 independent Australian craft beers, regional wines, and an assortment of classic and retro-inspired cocktails.