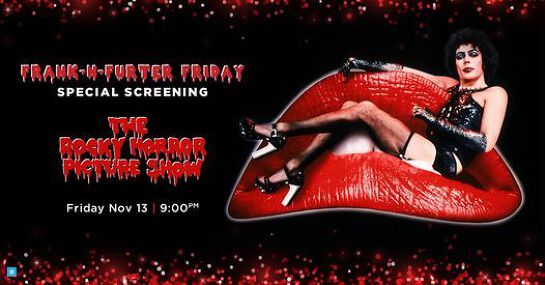 Join us for a monthly screening of ROCKY HORROR PICTURE SHOW on the second Friday of every month to Friday, December 11

The Rocky Horror Picture Show is a 1975 musical comedy horror film directed by Jim Sharman. The screenplay was written by Sharman and actor Richard O'Brien, who is also a member of the cast. The film is based on the 1973 musical stage production The Rocky Horror Show, with music, book, and lyrics by O'Brien. The film stars Tim Curry, Susan Sarandon, and Barry Bostwick and is narrated by Charles Gray with cast members from the original Royal Court Theatre, Roxy Theatre, and Belasco Theatre productions including Nell Campbell and Patricia Quinn.

On a wild and rain-swept late-November evening, somewhere at an empty stretch of road outside Ohio's merry Denton, blissfully-affianced, prudish, boringly-innocent young pair Brad Majors (Barry Bostwick) and Janet Weiss (Susan Sarandon) find themselves stranded on their way to visit an ex-tutor. Instead, the couple will inadvertently unearth the cross-dressing Dr. Frank-N-Furter's (Tim Curry's) spooky lair of inexhaustible oddities, just in time to partake in the out-of-this-world mad scientist's proud unveiling of his latest, delightfully extravagant, most daring creation: the ultimate male and the perfect sex symbol: the flaxen-haired Rocky Horror (Peter Hinwood).

But, little by little, as the effervescent transgressive force gobbles up whole the unsuspecting visitors of the night, Brad and Janet slowly begin to embrace the potent fascinations of seduction, while an idolized Rocky roams free in the mansion. Who can interrupt man's union with the absolute pleasure?