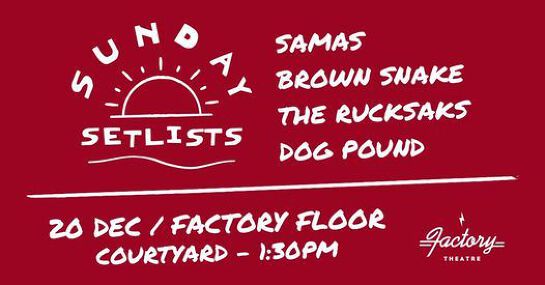 Your new live and local Sunday music hub. Connecting the vibrant local music scene and supporters across 3 stages every Sunday at The Factory Theatre.

The huge outside courtyard will be welcoming in the warmer rays of Spring with delicious eats, plenty of booze alongside great loud 'n’ local live setlists to close your weekend the right way.

It’s COVID safe so see you there.

Sydney artist with heart-warming single Nina out now. With help from his band their live show is quite different. With hard and fast hitting songs that make you want to overthrow the government, enjoy life or drink heavily depending on the song. Which matches the band perfectly.

Brown Snake are a band from Sydney playing mix of Pub Rock, 90s Grunge, Pop and Punk. Two brothers and one best mate make up this fiery three piece who are set to take over the world. A band for the people.

The Rucksaks are a five-piece Indie Rock band hailing from Sydney's South. Emulating a blend of old school rock and new school indie vibes. Their songs are typically fun and uplifting, with lyrics that juxtapose the instrumental feel by commenting on typical social situations and life in general.

Pour yourself a glass of scotch, add a dash of honey, stir it around, a Dog Pound gig will sound like it tastes.

Cronulla’s alternate rock 5 piece... DP, satisfying your ears with their punchy basslines, edgy guitar riffs and honey scotch vocals. DP’s style is much like a cake, layers and layers of sweet synth and rhythmic beats pretty easily consumed by the average dude… and lady of course.