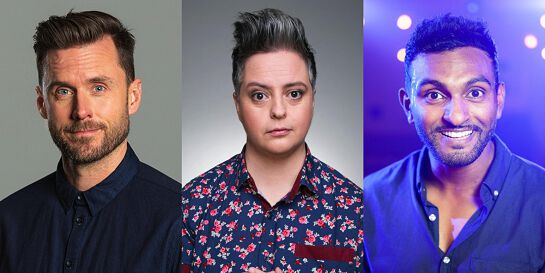 The Corner Hotel presents Corner Comedy - a triple headliner bill featuring the best in the business!

Dave is one of Australia’s favourite comedians. You’ve seen him in his many TV appearances, caught him acting in some of Australia's best telly and heard him hosting on some of the country’s most popular radio stations. A headliner in his own right, Dave has sold out live shows all over the country and overseas.

Geraldine is fast becoming an institution in Australian comedy. Best known in Melbourne for co-hosting Breakfasters on radio station Triple R, Geraldine has won awards and nominations for her stand up shows and has numerous TV appearances under her belt including the Melbourne Comedy Festival Gala and starring in comedy series Metro Sexual.

'The jokes have the audience laughing in waves.' - The Age

One of the biggest names in Australian comedy, Nazeem’s stand up shows have sold like hot cakes in Australia and around the world and his TV career has been stellar. He’s hosted his own comedy series on multiple networks, has his own Netflix special and even reached the Grand Final of I’m A celebrity Get Me Out of Here!