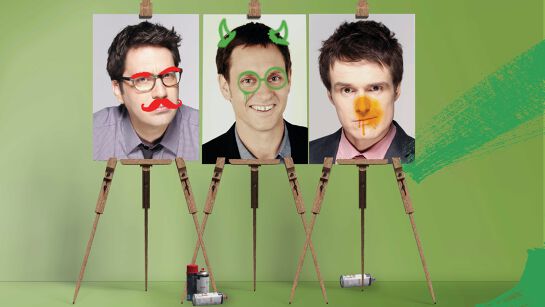 Successful dermatologist Serge has a penchant for modern art – and he’s got the receipt to prove it.
After forking out an outrageous sum of money for an obscure ‘Antrios’ painting, he is desperate to show it off to his friends Marc and Yvan. But where Serge sees a masterpiece, Marc sees money out the window and perpetually on-the-fence Yvan can’t seem to make up his mind either way. Divided by the canvas, a wicked battle of the wits unfolds threatening to unravel their friendship as insults and innuendos go from the painting to the personal.
From the pen of French playwright Yasmina Reza, this Tony Award-winning comedy paints a side-splitting portrait of the meaning of art and friendship. Following the success of Neville's Island, Artistic Director Mark Kilmurry once again joins forces with The Chaser’s Andrew Hansen, Craig Reucassel and Chris Taylor to deliver the laughs in this infuriatingly hilarious modern work of art.