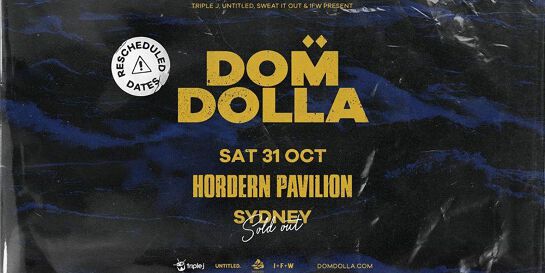 It’s been a mighty 12 months for the Melbourne based dj/producer.

Following a wild Aussie summer festival run across Beyond The Valley, Wildlands Festival, Listen Out and FIELD DAY - Dom Dolla returns to Sydney, Brisbane, Adelaide & Perth in OCTOBER but not before his sold out hometown show in Melbourne this February.

It’s been a mighty 12 months for the Melbourne based dj/producer following the release of festival bangers ‘Take It’ & ‘San Frandisco’ + remixes for Dua Lipa, MK, Sonny Fodera, Hayden James, PurpleDiscoMachine - Pooling 100million+ streams, a second ARIA Nomination, GOLD record, consecutive weeks as most played song on triple J back to back Aria club chart #1’s and notable performances at the worlds largest festivals including Coachella, Tomorrowland, EDC Las Vegas and sold out headline tours across America, United Kingdom and Europe.

This tour will be Dom’s only headline shows for 2020 as he pursues international waters... don't miss out!