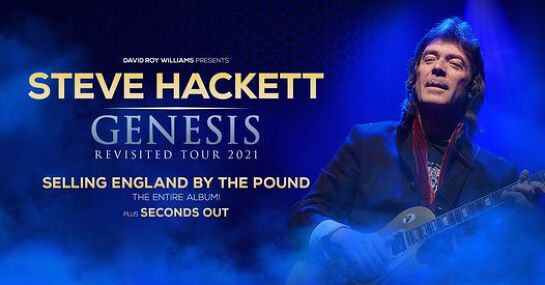 Great news – Steve Hackett and David Roy Williams Entertainment have rescheduled Steve’s New Zealand and Australian dates to first half of 2021. Steve and band would have loved to have been here next month but as we all know, that won’t be possible.

Even better news… not only will Steve being performing Selling England By The Pound in its entirety, but Steve will now also be performing our favourite Genesis live album – Seconds Out! ‘The Carpet Crawlers’, ‘Afterglow’, ‘The Lamb Lies Down On Broadway’, ‘Suppers Ready’ and more!

Unfortunately, this does mean Steve will now not be able to perform the full selection of Spectral Mornings songs but, wow – what an amazing set to replace those tunes with. Fans holding tickets should hear from the ticketing companies soon to confirm that current tickets held are valid for the new shows and your seats will be the same.

And if you don’t already have tickets… Get them now before the shows are all sold out!!