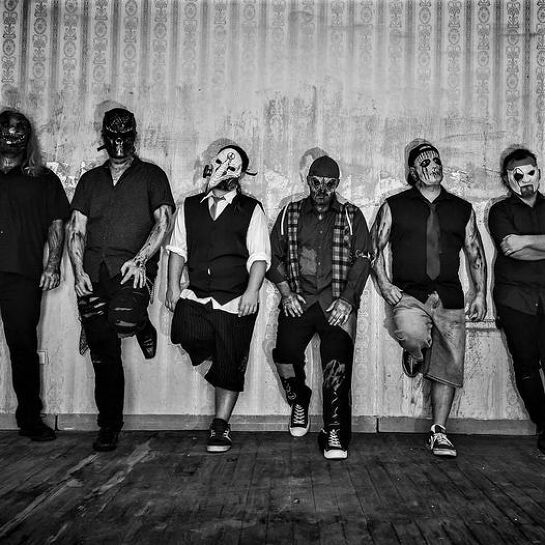 Talented Brisbane musicians who have teamed up to bring to the stage a tribute show like no other with all the video visuals and costumes and the Nu metal sounds that moulded many music lovers of the 90's through 2000's.

Covering bands such Slipknot, Korn, and Limp Bizkit to name a few.

Who will you find behind the masks ?

Kaosphere music is not your typical metal genre sound. In fact, Kaosphere have managed to take the best of Metal Core, Nu Metal, and even some elements of rap to create catchy tunes with hard-hitting lyrics that penetrate right to the core.

Barely taking a breath after the successful release of our 2018 single, Forsaking Shadows, they decided to hit the road for their first east coast tour.

They left some pretty impressive scars in the cities of Melbourne, Sydney, Newcastle, Bundaberg, Brisbane and of course their home town of the Gold Coast. The release of their first EP in mid-2018 kept them busy as a band playing stages around Sth East Qld and Australia.

The guys opened for 36 Crazyfists at the Miami Shark Bar on the Gold Coast in April 2019 as part of their Australian Tour.

2019 was dedicated mostly to writing new songs, hitting the studio and planning their album that is set for release soon.

They have taken their music to the next level and are excited about what they have created.

2020 has been a big year for Kaosphere! Their latest single "No Respect" was released February 28th.

They have a video due for release to coincide with the release of another hard hitting new single that is dropping August 28th.

Their Australian tour of 2020 has been put on hold due to Covid but there is no stopping these guys taking over the stages of Sth east Qld starting with the Woolly Mammoth.

“"Our music is based on reality and everything that surrounds it. The reality can be harsh, people will always use you and abuse you and the paths we choose are not always the right ones. That's what we talk about."”

PistonFist have driven hard and fast into the music scene with a foot firmly planted on the accelerator!

cementing their place since their inception in 2018. Armed with massive riffs, gravel strained vocals and super slick lead breaks PistonFist have unleashed their ‘Petrol Rock’

into the world and are ready to take it further!

PistonFist have already made a serious mark on the heavy music industry.

Their music is hard, heavy and in your face but also delivers a positive message. To them,music isn’t just about making noise. It is about that connection that only tight, solid outfits can make.