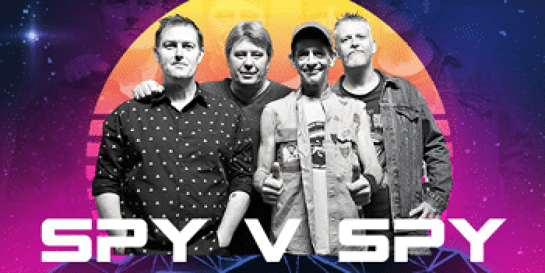 The socially conscience band that has been around since the early eighties.

Started in Nelson Bay but really found their way once they moved to Sydney, living in the squats at Glebe. Fast forward 30 years, Michael Weiley has itchy fingers & wants to get back to what he does best, play guitar live. He talks about seeing Cliff the original drummer while catching a train from Central Station & longs to re unite the magic they shared in the early days. The message is sent out & Cliff replies a couple of years later & soon Cliff is back on the skins, providing the missing heartbeat to the band.

Their last show together on stage was to a sold-out show & Michael’s last wishes for the band was for them to continue playing Spy v Spy music live.

The Spy’s live show is like being hit by a truck, the songs Injustice, Hard Times, Soldiers, A.O, Credit Cards, One Of A Kind, Don’t Tear It Down, come at you hard & fast, music with a message, an experience in musical nirvana.

The new line up is