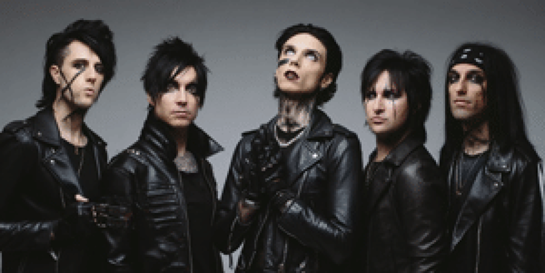 Tour Postponed to 2021 -New Dates To Be Announced Soon. All existing tickets remain valid for new dates.
Due to the current situation with the Covid -19 pandemic and government regulations, Destroy All Lines wishes to advise that the Black Veil Brides Australian tour scheduled for June 2020 will be postponed to 2021. We are presently working on new dates for 2021 and will share these in the coming weeks.

Destroy All Lines are thrilled to announce the return of BLACK VEIL BRIDES for their Australian headline tour which sees them performing in Brisbane, Sydney, Melbourne and Adelaide in June. Their long-awaited return is the band’s first Australian shows in 6 years.
BLACK VEIL BRIDES have championed the isolated, the dismissed, and the forgotten since the band’s early inception. That ethos and spirit persists in the fully realized incarnation of the band whose image is the object of devotion and obsession, and whose anthems are sung in unison by an international audience, a diverse legion who refuse to surrender.
In an era when rock music is regularly declared “dead,” BLACK VEIL BRIDES music videos have been viewed over a half a billion times. The band (and its members including vocalist, Andy Biersack, who was named as one of the 100 Greatest Living Rock Stars by Revolver) Instagram and Twitter accounts command close to 10 million followers between them.

This is a Licensed/All Ages event.

Photo ID must be provided to consume alcohol. * Intoxicated persons will not be admitted * No thongs or steel cap boots * The venue reserves the right to refuse admission to any person * Dangerous behaviour including Crowd Surfing, Stage Diving, Moshing and Violent Dancing is not allowed and will result in your immediate removal from this venue.