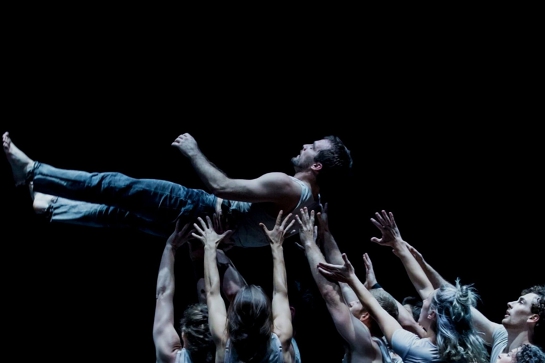 A Circa production commissioned by Scène Nationale de Châlons-en-Champagne and Merrigong Theatre Company
A deeply moving encounter of powerful acrobatics and sublime music.
Created by Yaron Lifschitz and the Circa Ensemble
The internationally acclaimed, boundary-pushing contemporary circus company who brought them Landscape with Monsters and Humans returns to Wollongong with a brand new creation co-commissioned by Merrigong.
In the first-ever circus setting of Stravinsky’s Rite of Spring, Circa tightly weaves together powerful world-class acrobatics, dark humour and rich tenderness. New music from French composer Philippe Bachman sits alongside Stravinsky’s revolutionary work, considered one of the most influential of the 20th Century. The famous high C on the bassoon sounds, and the stage explodes with bodies locked in a ritual until death.
Under the direction of circus visionary Yaron Lifschitz, the Circa Ensemble puts bodies on the line for Sacre in electrifying explosions of physicality and power.