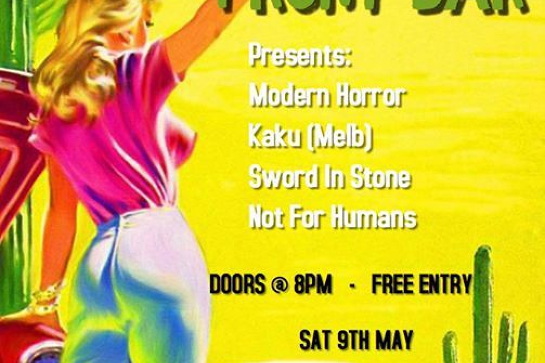 See three Adelaide bands MODERN HORROR, SWORD IN STONE & NOT FOR HUMANS w/ KAKU all the way from Melbourne tear up the stage with a BANG! SATURDAY THE 9TH OF MAY / FREE ENTRY / DOORS @ 8PM

Modern Horror are an alternative punk rock act from the southern suburbs of Adelaide. Formed in 2017, they drew on their love for fast, distorted punk rock.

Formed out of a mutual love and respect for John McLaughlin, KaKu is the enduring heavy-set love-child of Andrew Cossey and Ben Schier. Joined late 2016 by the incomparable Dan Bergowicz, the trio have hit packed venues such as Cherry Bar, The Tote and Dan's House Party.

Forming the band over their love for Pop Harmonies, Jangly Guitars and Dark Indie undertones. Sword In Stone have gained positive feedback from those within the music industry.

Not For Humans is an alternative and psychedelic stoner rock band created in 2015 by musician Danny Bishop. Playing with gentle and mellow licks, as well as wild and aggressive riffs, On October 27th 2017 Not For Humans released their debut single 'The Kiss' which has been played on local radio and featuring on All Over Adelaide.