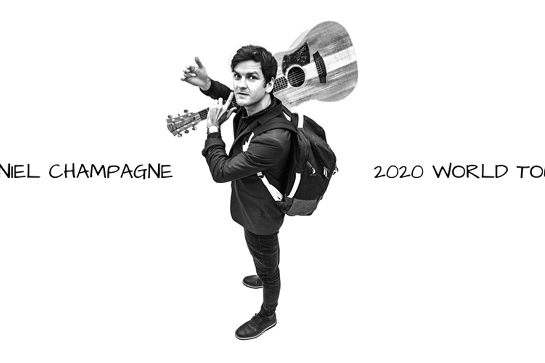 The young Australian born and Nashville based virtuoso recently described as ‘the finest guitar player of his generation’ brings his world tour back home with new music including a Queenstown show May 21 at The Paragon Theatre!

The story goes that Daniel Champagne first picked up his instrument of choice as a 5-year-old following in the footsteps of a music father. He began writing songs at 12, training classically throughout his teens and performing wherever he could, honing his craft and developing the dynamite live show that he is renowned for today. At 18 he left school, turned professional and hit the road without looking back.

The following years have seen him release four studio albums, tour relentlessly around the globe with upwards of 300 shows per year, play some of the biggest festivals under the sun and share stages with the likes of Tommy Emmanuel, INXS, John Butler, Lucinda Williams, Ani DiFranco, Judy Collins and Rodrigo y Gabriela. Daniel is now regarded as a leading light in acoustic music, with a firm reputation for dropping jaws, making crowds buzz and breaking guitars wherever he goes

Tickets just $20. Do not miss this show. They have been selling out all over the world!