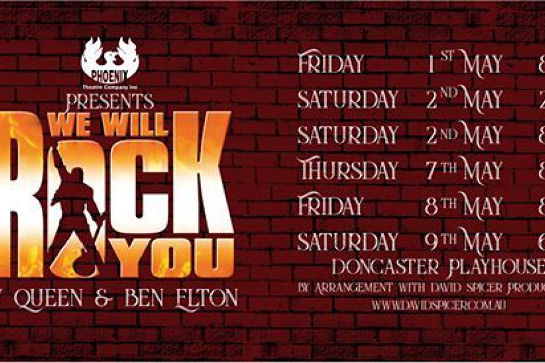 We Will Rock You Auditions

We Will Rock You

Featuring more than 20 hit Queen songs, We Will Rock You follows two revolutionaries as they try to save Rock in a dystopian world. The musical tells the story of a group of Bohemians who struggle to restore the free exchange of thought, fashion, and live music in a distant future where everyone dresses, thinks, and acts the same. Musical instruments and composers are forbidden, and rock music is all but unknown. Songs include "Another One Bites the Dust," "Bohemian Rhapsody," "Killer Queen," "Somebody to Love," "We Will Rock You," "We Are the Champions," and many more

• Songs should be in the style of the show but not from the show. Please be aware that due to time being very limited, you may not complete your song, so choose an appropriate starting point.

• Sheet music to be provided in the correct key. Backing tracks and Acapella not allowed. However, you may choose to accompany yourself.

• A headshot must be provided at the audition

• Arrive early to prepare. Please be patient in case we are running behind and have your music ready in a folder so you can go through your song with the audition pianist before you enter the room.

• Call Backs will be for voice and dialogue and will be held in the room as a workshop with all the other callbacks for that role.

All ages are approximate and based on look, not actual age.

A young misfit looking for meaning in a highly regulated world. Needs to be charismatic, charming, (a sense of comedy) and have a very strong rock tenor voice up to a full voice sustained high B. Falsetto up to a D above High B is also required.

She is also a young misfit, with a sharp wit who keeps Galileo on his toes. Eventually they fall for each other. Vocally, a strong rock mezzo belt voice is required.

She is a ruthless business woman, powerful, tough and glamorous with a strong stage presence. She has sass andcontrols every situation around her. A dynamic, strong character. Vocally, a very powerful, strong mezzo belt with the capacity and vocal stamina for a hard rock edge is required.

Khashoggi works for the Killer Queen. He is the embodiment of a future techno corporate stooge. High Baritone or Tenor.

“Brit” is short for Britney Spears, which is ironic as Brit is the antithesis of Britney’s form of pop. Brit of one of the Bohemian rebels who believe that there is a true musical style that can conquer the corporate ga-ga sound. High Baritone or Tenor with a rock edge.

“Oz” is short for Ozzy (Osbourne), also ironic. Oz, like Brit, is a Bohemian rebel, waiting for the return of rock music. A strong Mezzo belt voice is required.

Buddy is an old librarian with a passion for the old sacred texts (forgotten rock lyrics). He is the comic character that acts as a foil to the journey taken by Galileo and Scaramouche. High Baritone or Tenor.

The ensemble is a critical part of the show and play various cameo roles throughout. There will be a mix of very strong dancers, strong rock/theatre singer-movers and character ensemble parts amongst the Bohemian rebels. Much of the story is told through the atmosphere and locations set by the ensemble’s movement, so the ability to be a risk-taking, creative, receptive and flexible group member is critical.

The ensemble will be required to play multiple characterswhich include:

● Rebels: Outcasts driven by an underground fight against GlobalSoft and its leader Killer Queen

● Secret Police: Faceless, soulless stooges that work to the bidding of Killer Queen and Khashoggi