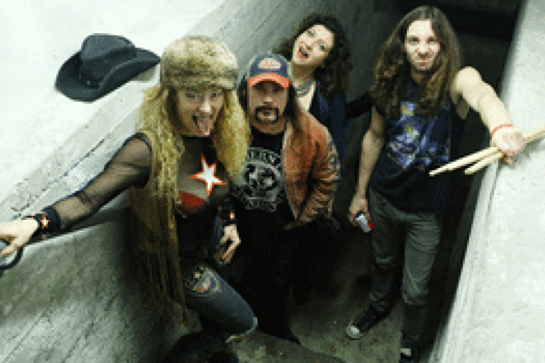 Atlanta, Georgia’s Nashville Pussy will return to Perth as part of their national Australian tour next May, with a headline show at Amplifier on May 10.

Cartwright grew up in Kentucky’s bible belt, listening to the Ramones and The New York Dolls to maintain his sanity; while in Vancouver, hippie kid Ruyter Suys picked up her father’s guitar and started playing along with Led Zeppelin and Jimi Hendrix.

The Grammy-nominated rock outfit traverse genres from Southern rock to psychobilly, hard rock, cowpunk and their own brand of "sleaze rock", with songs revolving around the subjects of sex, drugs, drinking, fighting and rock 'n' roll.

The band’s debut album Let Them Eat Pussy was recorded and mixed in five days for $3,000, picked up by Mercury Records for a million-dollar contract during a signing freeze.

Six studio albums later, the band has now played in front of hundreds of thousands of fans in nearly 40 countries; sharing stages with some of the world’s biggest rock bands, including ZZTOP, Marilyn Manson, Slayer, Iron Maiden, Black Sabbath, Lynyrd Skynyrd and Motörhead, with whom they’ve played every rock outpost from Asia to Europe.