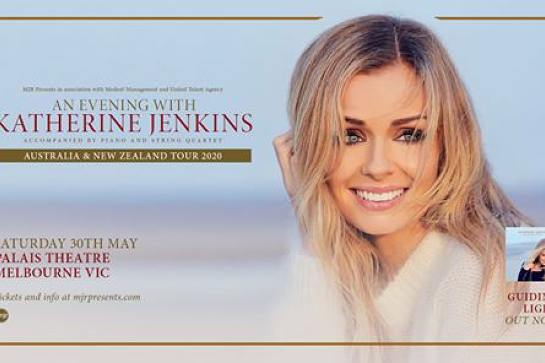 Having announced her Australian theatre tour earlier in the year, multi-award winning performer Katherine Jenkins has today announced a reschedule for all upcoming tour dates, and teased new music with a new record in the works. The tour, which was originally set to take place in iconic rooms around Australia this November, will now move to May 2020, giving Australian fans the opportunity to be some of the first people to hear new music from the British performer.

“Australia and New Zealand, I was so excited last year when I was told I’d finally be returning to your beautiful country to perform. It’s always been one of my favourite countries to travel to” Said Katherine Jenkins. “It’s with great sadness that I unfortunately have to postpone my upcoming tour, due to an unforeseen timeline to record my new album but I’m looking forward to returning in May next year, with a brand new record for you all to hear”.

Britain’s best-selling classical artist of the past 25 years, who first came to public attention when she sang at Westminster Cathedral, honouring Pope John Paul II’s silver jubilee in 2003, will now land in Australia in May, for a short run of shows in some of the country’s most prestigious rooms, including; Sydney’s State Theatre, Melbourne’s Palais, Perth Concert Hall, Adelaide’s AEC and Brisbane’s newest venue, The Fortitude Music Hall.

Following on from the success of her debut album ‘Premiere’ which topped the classical charts for eight weeks in a row, making her the fastest-selling soprano of all time, Katherine Jenkins continued her meteoric rise to fame, with performances at the Rugby World Cup, at Buckingham Palace for The Queen, at the Nobel Peace Prize Concert in Oslo and iconic venues including Wembley Stadium and The Sydney Opera House. Since becoming an international name, Katherine Jenkins has gone on to release 11 critically acclaimed studio albums, perform for the troops in Afghanistan, receive the Order of the British Empire (OBE) and numerous music awards, solidifying herself as one of the world’s most prolific crossover artists.

Tickets for Katherine Jenkins May 2020 Australian Tour are on sale now. All current ticket holders’ tickets remain valid for new dates. For those that have tickets in Auckland, Brisbane and Perth, the ticketing company in charge of the show will be in touch to send updated tickets, as seating plans may have changed slightly. Promoters and venues are doing everything they can to ensure ticketholders still have the same class of tickets in a comparable position.