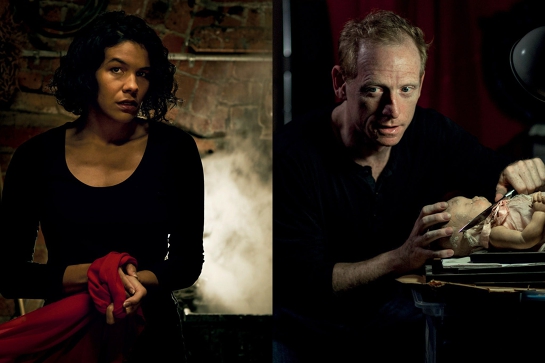 Far from Scotland, a man tinkering in his cellar has assembled a cage-like contraption from hoarded junk, where something wicked is being stirred up. What started as a hobby evolves into a battle for domestic dominance, as the darkness of Shakespeare’s tragedy curls its fingers around the heart of a suburban family.
Two actors and a child conjure the entirety of Shakespeare’s spectacle. New York theatre legend Scott Shepherd (The Young Pope, Elevator Repair Service’s Gatz) stars as Macbeth, turning himself inside out as he devours leader, relative and onlooker. Australian Zahra Newman (Wake in Fright) co-stars as a Lady Macbeth forging a new future.
A dangerous and adrenaline-fuelling production is staged in an electrified set, every gesture made creates a ricochet of sparks. Directed by Paul Lazar (Big Dance Theater, The Wooster Group), Macbeth unites Shakespeare and some of the world’s most inventive theatre-makers to expose how alarmingly possible it is to arrive at an ignorant present.